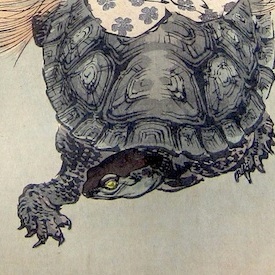 The great watershed of nineteenth century Japan occurred in 1868 with the restoration of the  Japanese monarchy and the dissolution of the Tokugawa Shogunate which had ruled Japan since 1603.

The new government was committed to an aggressive policy of modernisation and democracy along the lines of the British and American model. The Tokugawa Shogunate had in contrast violently opposed and repressed any move towards change or what it saw as western industrial influence. Evidently such different positions divided loyalties right across the country and this is clearly illustrated in the production of Japanese woodblock prints. Some ukiyo-e artists were highly motivated to oppose changes to the traditional way of life, others embraced them. The overwhelming mood though was one of acceptance.

Whilst the date is significant, it is hard to say that prints produced before this date were ‘Edo’ and those made after were ‘Meiji’. There is however a clear trend in both subject matter, style and quality which becomes more apparent as the century progressed. Most striking is the use of colour. With progress came industrialisation and the ability to produce aniline dyes and commercial pigments. The distinctive reds, blues and violets of Meiji prints are hard to miss when compared to the vegetable and organic dyes of the early part of the century. Vibrant and sometimes harsh, only the great artists of the period such as Yoshitoshi and Kunichika were able to create subtlety or sophistication from the new colours. For an artist such as Kunichika, the new reds were the ‘colour of enlightenment’ and their use had political overtones as well as artistic purpose.

Subject matter for Meiji artists continued the tradition of picturing the still wildly popular kabuki theatre. In the case of artists such as Kunichika, the production of theatre prints still overwhelmingly made up the bulk of their commissions.  Historical subjects remained popular and often carried critical political undertones especially in the case of artists such as Yoshitoshi or Chikanobu who were sentimentally and politically attached to the previous administration. There was however, an increasing demand for picturing the new. In print series such as Yoshitora’s 53 Stations of the Tokaido Road of 1872 , we see the use of telegraph poles as significant decorative devices - a sure reflection of the new era’s commitment to modernisation. Pictures of beautiful women had always been a staple of ukiyo-e production, but as in the case of Kunichika’s Mirror of the Flowering of Customs and Manners of 1878, these bijin pictures reflected the new western influences and stopped looking back to the dreamy floating world courtesans of Utamaro. Kunichika’s women are tougher, and have personalities and stories to tell and this is also the case in the work of Yoshitoshi, where women figure as identifiable characters for almost the first time in Japanese art.

Some Meiji artists of note are Utagawa Chikanobu (1838 - 1912), Toyohara Kunichika (1835 - 1900), Taiso Yoshitoshi (1839 - 1892), Mizuno Toshikata (1866 - 1908) and Ginko Adachi (1874 - 1897). Their work was ignored during much of the last century, as connoisseurs favoured archaic and classical period artists. Later woodblock print artists are undergoing a vigorous reassessment with the publication of major books and catalogues and new international exhibitions. The renewed interest in these artists is also reflected in sale room prices with some prints by Yoshitoshi for example, fetching many thousands of dollars at auction.