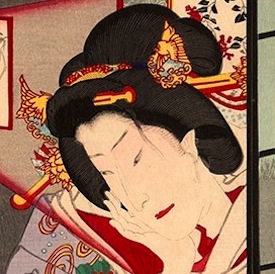 Since I am tired of painting portraits of people of this world, I will paint portraits of the King of hell and the devils.

These lines, from the death poem of the Meiji Japanese woodblock print artist Toyohara Kunichika, are unusually frank and revealing. They show an artist who saw himself principally as a portraitist and a man who knew that he had led a somewhat dissolute life. Kunichika spent a lifetime preoccupied with the theatre; he was a great artist and a fine draughtsman and like the other greatest ukiyo-e artists, he reinvented an art form at the crucial point of its collapse.

Kunichika was apprenticed to Utagawa Kunisada at thirteen having previously worked in the studio of the artist Toyohara Chikanobu (not his more famous contemporary of the same name) - his artist’s name being a composite of his two teachers as was the custom. His first confirmed print is from 1854 but his mature works begin in the early 1860’s. Kunichika was above everything an artist of the theatre. The vast majority of his output was concerned with actor portraits - as demonstrated in his great series 100 Roles of Ichikura Danjuro, in depictions of kabuki performances or scenes from well known plays. Despite his obsessive interest in kabuki, some of his best work remains the non-theatrical series, notably 36 Good and Evil Beauties.

By today’s standards, Kunichika was probably alchoholic, his life in Edo was chaotic, once claiming to have moved house hundreds of times, leading a contemporary to say of him: print designing, theater and drinking were his life and for him that was enough. By his own admission he spent the bulk of his spare time at the theatre or in the dressing rooms and it is hard to think of another artist of such stature in any culture who made such intimate representations of actors or their lives, although there are parallels to be drawn with his near contemporaries in Europe, for example Degas or Toulouse-Lautrec. Despite his womanising and drinking, Kunichika gained great credibility and success as an artist. There exists a long interview with him where the journalist observes:

Inside, the entry...leads to a room with worn tatami mats upon which a long hibachi has been placed. The space is also adorned with a Buddhist altar. A cluttered desk stands at the back of the miserable two-tatami room; it is hard to believe that the well-known artist Kunichika lives here...

Like so many artists, Kunichika has suffered at the hands of misplaced connoisseurship in the mid twentieth century. Famously, the fifty leading ukiyo artists including Kunichika were labelled ‘decadent’ by the influential collector Arthur Davison Ficke. This label persisted and falsely depressed the true appreciation of nineteenth century ukiyo for decades. The genius of Kunichika is now belatedly recognised, helped by the important publication of Amy Reigle Newland's Time Present and Time Past: Images of a Forgotten Master: Toyohara Kunichika 1835–1900 in 1999.

Kunichika has become a very collectible artist, notably for his groundbreaking reinvention of the theatre triptych in the 1890’s and his earlier portrait series such as Mirror of the Flowering of Manners and Customs. He is remembered for his talent as a colourist, especially for the creative use of the new aniline dyes later in his career. His work is well represented in all major international collections.