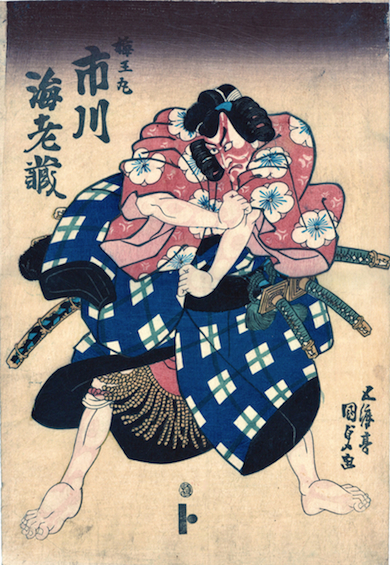 For fluent Japanese speakers and ukiyo-e experts this post will be unnecessary, but a surprisingly large number of collectors of Japanese prints are neither. Furthermore for anyone attracted to the mysterious beauty of these art works, or perhaps captivated by a corridor of Kuniyoshi prints at the British Museum and want to know more, then there is an odd lack of good advice for the enquiring mind. Specialist monographs can be outstanding but my goodness, more expensive than the actual prints! For example, Time Present and Time Past: Images of a forgotten Master: Toyohara Kunichika 1835 - 1900, by Amy Reigle Newland is currently £455 on Abe Books and £1,102 on ebay! It’s a lovely book but at one hundred and sixty seven pages, it is far from exhaustive.

Google is the best bet but most enquiries and search results will return commercial galleries many of whom have very perfunctory information on their prints. So where to start? I hope here to list a few pointers that might be helpful whilst looking at a very affordable but very nice Kunisada print, Ichikawa Ebizo V as Soga Goro, from 1832. The print is not recorded officially which adds to its rarity; it shows the truly great actor Ichikawa Danjuro VII in the year that he changed his name to Ichikawa Ebizo V. It follows his dynamic and aggressive co-opting of the kabuki canon into the eighteen plays of the Danjuro clan, the so-called Kabuki Juhachiban. The performance is that of Soga Goro in the short, bombastic play Ya-no-Ne, a scene where he acts the part of Soga Goro awaking from a dream. Goro is one of two famous hero brothers set on avenging their father’s death, but how do we know that? Well, it is possible to use some of the tremendous resources online, mostly done by devotees and not for gain, to investigate an apparently impenetrable image.

If we start with the writing, many of the scripts that were used are so cursive, like autographs, as to be difficult to read even for native Japanese speakers. However, the signatures and names of the actors and artists whilst often stylised and exaggerated can be often read and there are good resources for these online. For Kunisada, the best online resource is certainly, The Kunisada Project which is selflessly run by Horst Graebner. Huge numbers of prints are listed there in sections, but even these represent a small portion of Kunisada’s output. The highlighted section kabuki actors portrayed leads to a fantastically useful link which lists actor signatures. It is hard at first but with perseverance one can track down the kanji for the Ichikawa clan and then find the second name, Ebizo. The kanji for the actor’s name are the large ones on the upper left in this print. But which Ichikawa Ebizo? The equally fundamental site kabuki21 takes us to the various pages for the stage families of Ichikawa Ebizo and it is simple by elimination to figure out that the likely candidate is Ichikawa Ebizo V, who was around in the 1830’s. We know that the print is from that time because of the signature at lower right which again can be checked on Horst Graebner’s site, telling us that this form of signature was used at around that time. Kunisada’s signature is fairly easy to spot and remains reasonably consistent. For the elimination of doubt, artist’s signatures are clearly laid out in ukiyo-e.se maintained by  Hans Olof Johansson.

Other marks can be used to help with identification. For example, on this print the strange circular seal at the bottom of the sheet is a censor seal(kiwame) - meaning that the print was approved by the authorities. At certain times the government imposed strict censorship… the Tenpo reforms of the 1840’s for example and the seals from this period become more complicated and more accurate, so whilst this is not detailed, the kiwame on its own means that the print must be before 1841.

The oblong and dot are the publisher’s mark. Publisher seals can also be useful in dating a print. A useful introduction to publishers can be found on the tremendous site, Prints of Japan which has stacks of useful information. This site tells us that the publisher was Kinkodo. Collating the date seal, the publisher’s seal, the censor seal, the actor’s signature, the artist’s signature and the likely performance will, through a process of elimination, give us all the information that we require… but, it is an inexact science. The same print can crop up in two separate museum collections and yet have some different attributions. Part of the joy of collecting is tracking down the information and putting it back out into the world. In this way collectors, dealers, museums and the utterly selfless reference sites, some of which are listed above, enlarge and illuminate the dim world of art and performance that was the Edo scene in the nineteenth century.