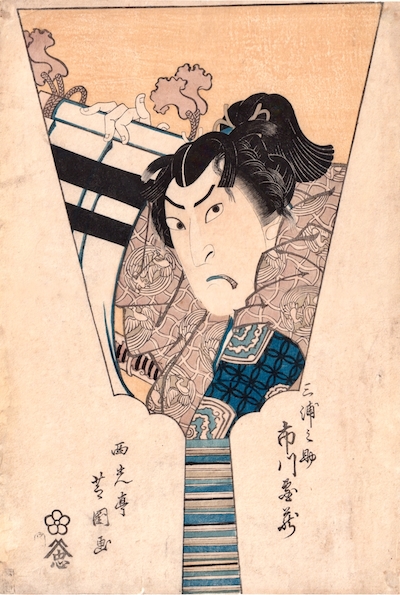 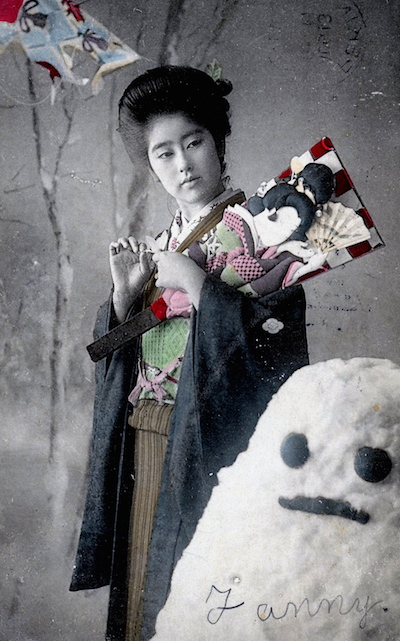 There are two pictures on this page, one is a print from the current exhibition, (Ichikawa Danzo V as Miuranosuke Yoshimura from 1824); the other is a photograph taken in around 1907.  (I am indebted to the collector of Japanese postcards who put this online.) A long time separates the images but they both show an image of the same object - a  decorative hagoita bat.

I was surprised I have to say by the photograph; the paddle is much bigger than I thought it would be…. looking at the print and several others we have shown, I imagined the paddles to be much smaller. Also, I cannot find a paddle which is made in the same ‘style’ as the prints… in other words there is a tremendous vulgarity in the manner of the drawing and the making of the bat which when translated by the woodblock artist either as here, Shibakuni or in other artists such as Kunisada or Kunichika,  becomes an object of subtlety and beauty. I was disappointed! There is a kitch quality to the bat not present in the clean aesthetics of the woodblock prints… one could argue that Kunisada could not draw a bad line! Nevertheless, the artists that have used the bat as a prop in their work have translated the style into the clean and organised manner of ukiyo-e which suggests a greater degree of ‘aestheticism’ than one might have thought, especially in the case of later, Meiji artists.

I wonder what Shibakuni was doing here? 1824 is quite early for using the bat as a vessel for an actor portrait, in fact I cannot find evidence of the device being used before this date. As we have seen, hagoita framed actor prints have been made by Kunisada, Yoshitora, Kunichika and Kuniyoshi, but all of them much later in the nineteenth century.

All of this makes the print very interesting, very original, very collectible. Osaka artists such as Shibakuni were very inventive in the forms that they introduced into their actor portraits. Fan-form bust portraits by Hokushu are not uncommon and the conceit of the palimpsest was a popular way of showing an actor’s features and a separate scene or space for poems, songs or plot descriptions. There is also the playful idea that one is not actually making a portrait at all! Because especially with fan-form prints the question arises as to whether the print is a picture of a fan or a bat, or whether it is the appliqué decoration for such an object (these prints by Hiroshige are quite common), or indeed a portrait. These distinctions, these pictures in pictures would have appealed hugely to the Osaka sophisticates who were the obsessional fans of kabuki and the patrons of these tremendously knowing artists. I am reminded of the American Artist Jasper Johns and his ground breaking painting of the American flag in 1955… posing the question, is the object a flag, or the painting of a flag?

Likewise, is this a picture of a hagoita or is it a portrait of Ichikawa Danzo V, something which may have become a useful defence when legal prohibition came into force twenty years later. The print joins two known prints showing Nakamura Utaemon III, in the role of Tozo the farmer (in reality Sasaki Takatsuna) in the British Museum and Nakamura Sanko as Okura in the MFA Boston, and completes the series of three prints adding the role of Miuranosuke to the set. This makes it a very important Osaka print and relevant to the prints already in the museum collections.